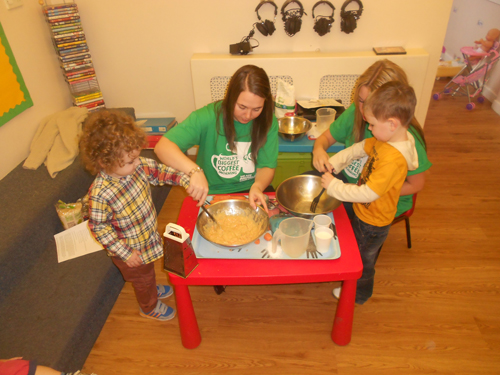 Paul Lindley, the founder and chief executive of baby food company Ella’s Kitchen, has created the report, titled: ‘Averting a Recipe for Disaster: our Children and their Food.’

In it he lays out his ambitious hopes for a 25 year long term strategy that focuses on the health and diet of the youngest children in society and said: “There is an opportunity to save a generation of children from the twin evils of obesity and hunger.”

With the current cost to the NHS of diet related disease in the estimated region of £6bn, the report launches a campaign based on research from teachers and parents and the input of collaborating professionals in order to create eight steps to support the vision of a healthier society.

The survey, carried out by YouGov on behalf of Ella’s Kitchen, revealed that 88 per cent of teachers said poor nutrition contributed to children’s negative behaviour, and 26 per cent of parents said the price of buying fresh ingredients was the main barrier to children’s healthy eating at home.

As well as childhood obesity and the health risks accompanying it, the report showed the increasing problem of deprivation affecting children from low income families, with 49 per cent of teachers revealing that they have brought food into schools for children who have not received a breakfast at home.

Samantha Hyde from Save The Children commented: “Recently one mother shared with us that she eats three times a week so that her three children can actually eat.” The report praised the services already providing some children with hot meals such as Magic Breakfast and Kids Company calling for a similar nationwide campaign to give free breakfasts for every primary school child.

Patrick Butler, editor of society, health and education policy for The Guardian also observed: “When people’s income shrinks, they have to buy different kinds of food and one of the problems is that we’re eating junk.”

The report described how 93 per cent of parents agreed their knowledge of cooking and healthy eating influenced the extent to which their own child ate healthy food. Rob Rees, chair of The Children’s Food Trust, said: “It’s about getting it right from the start – what mothers are eating, what kids are fed at a young age.”

The report also highlighted barriers such as the cost of food and the time it takes to cook which parents attributed to poor diet choices, but reinforced that education and good food experiences begin at home.

A solution championed by the report is the re-introduction of compulsory cooking lessons on the curriculum for primary schools in order to positively influence children’s individual relationship with food. The contributors to the report suggested that schools have a broader role to play in improving children’s relationships with food.

The eight ideas put forward by the report included more public service announcements on TV, improved support for new mothers, and emphasised the need for a 25 year plan to improve nutrition for the under-fives which is not subject to party political lines.

Mr Lindley said: “As this campaign launches, one month into 2013, we have already witnessed an escalating political debate over sugary cereals, a frontbench politician discussing the regulation of food manufacturers and major commitments from the Mayor of London and Blackpool Council to deliver free breakfasts to thousands of schoolchildren.”

The report concluded that a collaborative effort will be essential to move towards a society which has a better relationship with food, rooted in the 25 year plan focusing on young children.

Nap time is very important at our Day Nursery in Liverpool

Posted On 11th October 2016 ~ 0 Comments
Daytime naps are crucial for babies and toddlers’ brain development and are essential for their wellbeing. Yet many young children go without a nap at

Free Summer Places at our Day Nursery in Liverpool

Posted On 13th April 2015 ~ 0 Comments
Nursery Education – Here at Our  Day Nursery in Liverpool we will be preparing to start our 2, 3 and 4 year old grant summer

Posted On 29th March 2016 ~ 0 Comments
Our Spring Nursery Education Grant here in our Liverpool Day Nursery has finished for this term. Our new term will start on Monday 18th April