A Day at Dinosaur Beach 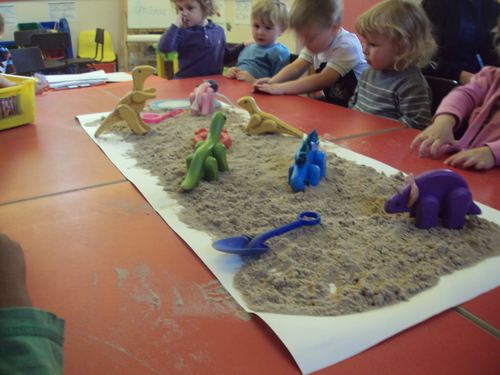 As part of a colouring competition the children in the Pre School had to draw and devise a story based on Dinosaurs at the beach. We set out our very own scene and allowed the children to freely tell us a story the story is as follows:

‘The sun was shining one day on Dinosaur Beach and there was an elephant, a big crab and a little crab and he cracked out of the egg. The T Rex called don’t know was making a sand castle a dinosaur with a long neck he was doing his curly thing with his tongue, just a dinosaur. That’s the daddy dinosaur there the one with the long neck he’s got the kite on his tongue. The kite came down and blew away and went back up to the sky and got stuck to the sun.
He’s going to get up the tree then he’s going to tall because he’s too big so he gets a ladder and he fell and hurt himself again. And get a birthday cake and sit on it. The little Dinosaur has got an umbrella then he’s sitting on a chair have a rest with a chocolate ice cream. He eats all the ice cream up and a butty and then gets on an aeroplane and flies home. When he gets off the plane he gets onto the bus then gets in the car and drives to his house. He climbs up to bed and drives to his house he climbs up to bed and falls fast asleep.

Grandparents who help with childcare are living longer

Posted On 5th September 2017 ~ 0 Comments
In the widening controversy over the failure of a HMRC website designed to administer the new ‘30 hours’ scheme, HMRC chief executive Jon Thompson has

Posted On 20th April 2015 ~ 0 Comments
Here at our Woolton Village Day Nursery in Liverpool we will be taking part in the Celebration of St Georges Day. This will take place